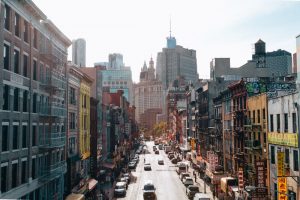 Do you know which city has the largest Chinese population outside of Asia?  You guessed it; New York City. In fact, only Dominicans represent a larger foreign born population than Chinese migrants in New York.  If a New Yorker is asked about the city’s major Chinatown centers, they will likely refer to Manhattan’s Chinatown around Canal St., Sunset Park’s Chinatown in Brooklyn, or downtown Flushing in Queens.  However, newer small Chinese clusters are emerging in several spots throughout metro NY, such as the Elhmhurst, Whitestone, and Bensonhurst neighborhoods. Many now suggest that there are 9 Chinatowns in NYC, but that count might be higher. Mandarin-speaking and Cantonese-speaking communities are well-represented in NYC, and the city has become host to numerous Fuzhou immigrants. East Broadway in Manhattan has even been referred to in recent years as Little Fuzhou, essentially a Chinatown inside the larger Chinatown.  Manhattan’s East Village even saw a surge in Chinese restaurants as a number of Chinese international students come to study at nearby New York University.

If you have a passion for Chinese peoples, New York City may be the mission field that is calling. There is an opportunity to connect with Chinese communities throughout the city, and there is a vast diversity of Chinese people from different regions of China and a variety of dialects & people groups represented in New York. Chinese migrants in the city range from the struggling urban poor to wealthy business owners to successful scholars in the city’s universities to suburban professionals.