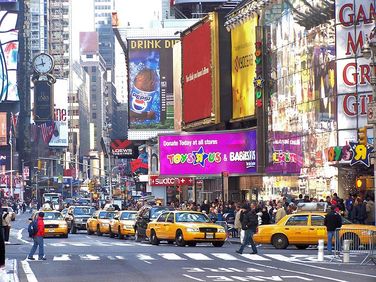 I joined Global City Mission Initiative (GCMI) in January as the development coordinator. My first three weeks were spent getting to know the board and many current supporters of GCMI.  As a new representative of the ministry, last week I headed to New York City to see firsthand some of the work being done by a GCMI missionary. Here is what I experienced.

This was my first ever trip to New York City, and it was unlike anything I have ever experienced. Upon arrival, I quickly recognized that a true Christian lifestyle would be difficult for those who were not strong in their faith. My first full day felt like a bombardment of secular values and consumerism. While one can find this anywhere, in New York City it was magnified and shoved in your face.

The highlights of my trip were meeting with the believers in the city. These men and women had many struggles they were working through. But let me tell you, they encouraged me as much as anyone I’ve ever met. They were really able to look past their hardships and distractions and maintain a Kingdom mindset.

There is one hour of my trip that really stands out and sums up what GCMI is about. Jared took me to meet a person of peace to hear his story. “J” told me that many of his friends had left him because of his decision to follow Christ. This Christian life that he had chosen was becoming his identity, and he was not afraid to show it. By no means is “J” a finished product, none of us are, but he understood what it meant to be a Christian and was pursuing it.

“J” was called to serve right where he was at, and that lead to some impactful relationships. He told me about a man he befriended who was an atheist. This guy would leave the room anytime Christ or the Bible was mentioned. “J” says now he takes part in reading the Word and is involved with discussions about faith and Jesus. GCMI has equipped “J” to seek and save the lost right where he lives.

Something else happened that day that was pretty cool. “J” brought a friend with him who was not a Christian but began opening up about his own struggles. There is no question in my mind that hearing “’J’s” story affected “A”. A seed was planted in this man’s heart and I have no doubt “J” will continue to encourage him. Prayer is needed that “A” receives the Holy Spirit.

New York City is probably the most unique and diverse global city in the world. It is the quintessential environment for evangelism as life there offers many distractions. materialism, false religions, sex, drugs, and many more schemes of the evil one that fight to acquirer ones attention. In order to reach these various people groups, some outside the box ideas need to be brought to the table on evangelism. There is no question the Lord is working in this way through His servants.