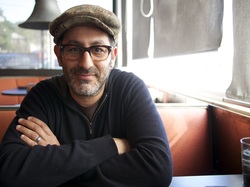 I’ve always heard that the Lord “works in mysterious ways.”  I think this is one of the ways people have tried to explain the unexplainable or improbable.  Take this story for example…

Last week I was trying to sell our coffee table on Craig’s List.  Craig’s List can be pretty shady from time to time.  Its full of people trying to scam you, or get rid of their garage trash.  All that to say, I take cation when being contacted by a potential buyer.

On Monday night I got an email about 5:00pm saying they would like to buy my table and would like to make a deal before 7:00pm that day.  I ended up getting on the phone with a man named Ramy who said he wanted to buy the table for his recording studio downtown.

Sara and I drove up to the dark ally downtown where Ramy told us to meet him.  When we got there we were greeted by 5 musicians taking a smoke break in front of the door.  Ramy helped me carry the table in and paid me the price we agreed on.

I struck up a conversation with him about the kind of music they were producing in the studio.  I continued the conversation, asking several more questions which let to him telling me that they have a “spiritual community” that meets here.  After asking more about this “Spiritual Community” I discover that what they are doing here is actually strikingly similar to what we are here to do.  Amazing!  Here I am in the middle of a city where 9 out of 10 people are not connected to any church at all and I meet a guy who is the leader of a house church (which represents about 10% of American church goers faith community).  My odds are better at winning the lottery than meeting this person via Craig’s List.

We continued our conversation and decided we should get together soon.  So we ended up having breakfast just a few days later at the 24 Diner.

Over breakfast I discovered that he is actually a leader of a whole network of simple churches here in Austin!

Ramy was incredibly encouraging, urging me to press forward in the direction we are moving.  He invited me and Sara to join them in whatever way we might find helpful.  Our whole time together was really a beautiful time of encouragement, affirmation, love and unity.

Do you get the picture yet?

The odds of me selling my coffee table to this guy are 1-in-a-million at best.

But that’s the beautiful thing about our King.  In Him, 1-in-a-million is a sure thing.