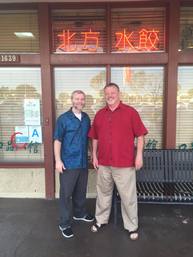 I met Kim at International Conference on Missions (ICOM) in 2012.  We were just starting Global City Mission Initiative, and in fact our first missionary catalyst (also recruited through ICOM that year) wouldn’t be on the ground in New York City until the next Fall.  Meeting Kim in a conference convention hall, I quickly recognized I had some things to learn when it came to exhibit booths. At the time, it was clear to me that he was good at it and I wasn’t.  And a friendship began that offered a lot more opportunities to learn beyond the conference exhibit hall.

Global City Mission was just getting started, and Kim was just beginning a new ministry, applying the same type of strategy, in the Los Angeles area. It didn’t take long for Kim’s platform of “Impact L.A.” to merge with Global City Mission.  And over the next few years Kim & I shared regular conversations about persons of peace, making disciples, urban mission, and developing partnerships.  In 2013, we made a road trip together in Texas, sharing life together, privately debating our different takes on sports, politics or theology, but most of all speaking about our shared mission to make disciples through global cities.  For me, he became a sounding board in the very earliest & most embryonic conversations about GCMI as a new missions organization.

Kim often described himself as fairly stubborn. For him, it was a badge of honor because it was a stubbornness that came out in so many of the best ways.  It’s the kind of stubbornness that recognizes the most important thing and then just won’t quit.  It’s the quality so true of so many missionaries over the ages. It didn’t matter how many hits he took, he would keep telling people about Jesus.  Even after he suffered a stroke, he was sharing the good news of Christ with the hospital staff.  When he was confined to a wheelchair, he saw his new vulnerability as an opportunity to build relationships with the homeless he encountered around Los Angeles. Kim made disciples, started churches, and loved to share the gospel with people.  If every disciple of Christ loved their city like Kim loved L.A., I can only imagine the impact that would be made for God’s Kingdom.  And someday we will reunite in the Heavenly City.
​
Kim Gasaway, missionary to Los Angeles, passed from this life on Monday, December 3, 2018.