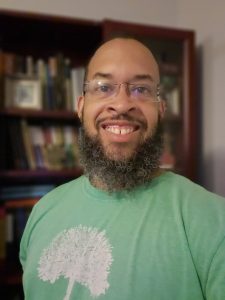 Ramon is from Dallas, TX. He met Cessilye, his wife in 1999 at University of North Texas where he started his college career as a Jazz Studies major. After a fortunate series of events brought him to saving faith in Jesus he found an insatiable desire to know Jesus and make him known in urban contexts. He transferred to Dallas Baptist University where he graduated in 2005 with a degree in Biblical Studies. He and Cessilye wed in 2007 and have sought ways to serve Jesus in various communities including Southeast Fort Worth, West Chester, PA, and West & South Dallas. After serving as a youth minister in West Chester, PA for 18 months and having their first of four children he and Cessilye moved back home to the DFW Metroplex where he began serving the West Dallas community at Mercy Street.

Ramon has a passion for comprehensive discipleship, the witness of the church in marginalized communities, and culturally informed ministry. He has spent the last few years working with high school boys and with the adults, (mentors and parents) in their lives striving to demonstrate the relevance of God’s word to their lives and in their decisions.

He is serving on our team as a Regional Mobilizer. His role is to propel laborers into the harvest, by locating potential mission catalysts and activating local churches & believers for disciple-making.