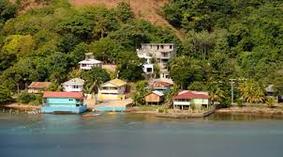 Suyapa is from a small coastal village in Honduras. I was happy to meet her because I lived in Honduras at one time as well… In fact ‘my town,’ Trujillo is about a 20 minute drive from her village, a place that I have actually visited. While it is a bit of a surprise to meet an individual from the same small district in which you have previously lived, it may be even more surprising to find out that you have a more personal connection as well.

This was the case with Suyapa and myself. The discovery came about because Suyapa thought she knew me because I had the same name as a ‘North-American’ missionary living in her village that she remembered from when she was a child. Although we determined that I was not that missionary, it became clear that this missionary was also a friend of mine as well. He and his coworker were both people that I had worked alongside during summer visits before they decided to move to another city to plant a church among the ‘Garifuna’ people living there. It is from this church planting activity that Suyapa knew my missionary friends. Mostly, she remembers going to the church and watching movies about Jesus and receiving crayons to color pictures.

Maybe it should not be too surprising that I ‘ran into’ Suyapa here in the Bronx, after all, there are over 100,000 Garifuna from Central America not to mention the large number just from Honduras living in New York City, most of whom live in the South Bronx. That said, how likely is it that I met someone from this tiny little fishing village, who has a connection to the missionaries who lived there and the church they planted, all of which I am connected to as well? While maybe not impossible, I would have said that the odds were against it.

Since meeting her, Suyapa and I have been reading the scripture together as a practice to learn English. She has also brought a friend to read with her. They are both primarily interested in learning English, but they are also beginning to inquire about and engage with the stories of the bible. They have both commented that they were now learning the meanings of these ‘stories’ which they have heard before but for which they had previously not given much thought. What might God be up to in all this? Pray that God would give them soft hearts as they continue to engage the scriptures and likewise his transforming power through the truth found in his word.