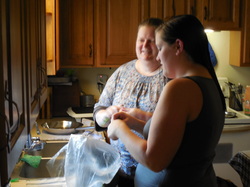 I began my faith walk in 1985. At that time and probably until today I was taught. Teaching is the focus of the church today. A disciple, as I was taught, studies the Word of God. Going deep into the theology/teachings of God. The emphasis was the knowledge of God passed down through the ages by the Apostles teachings. It was very academic and that was good.

But was it all it was meant to be? Merriam Webster defines theology as this: the studies of religious faith, practice, and experience, the study of God and of God’s relation to the world.

Note the emphasis on practice. I became deprived of seeing the need to follow a mentor, one who is living out, wrestling with and eventually finding direction in the faith. I could look up Greek words, discus the error of the ways of other faith understandings and defend my positions but was this all and good?

In the first book, O Theophilus, I have dealt with all that Jesus began to do and teach,
(Acts 1:1 ESV)

Note the italics. Action was always implied in my learning. It was obeying what I had learned.  I now have come to a new realization. Jesus could have whipped out his doctrine in an afternoon but he chose a different path. He chose to live among us.

I don’t mean for one to neglect the academics but this is just one half of the education, and one might argue the easiest aspect of becoming a disciple.

A faith walk implies moving from one place to another. I have traveled some distance. I have come to read the Great Commission with greater depth. That little tag on at the end, and surely I am with you always, to the very end of the age, takes on a whole new meaning. I pray that we begin to teach like Jesus and come up alongside people and show them what Jesus did and taught.
Now go make disciples!