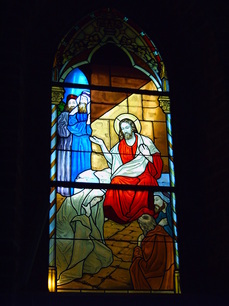 A few days ago there was an unexpected knock on our door.  Living in NYC, I usually know who’s coming up to our 6th floor apartment when they buzz from our building’s first floor entrance.  An unexpected knock on the door usually means one of three things.  1)  One of our neighbors from inside our building, 2) An alternative energy salesperson, 3) Jehovah Witnesses.

You win if you guessed: a Jehovah Witness.  She asked me one of their opening questions, and to be honest, I gave a quick but dismissive reply to send her on her way.   Naturally, she went on to the next door.  A few minutes later, my wife gets a call from our neighbor.  Our neighbor then told my wife that when the door-to-door evangelist knocked on her door, she said that she identified herself as her neighbors — in other words, us!  Our neighbor quickly realized that she had lied to get her to come to the door.  Feeling quite offended, she called my wife to tell her what happened, and of course we felt at least as violated by this deception.

I’m not just trying to pick on Jehovah Witnesses though.  Some months ago, my wife was becoming friends with another mom in the city, and she began inviting my wife to their church events.  That wasn’t a problem, but we soon realized that the church events were connected to a particular sect well-known for legalism, manipulation, & extreme sectarianism. Countless people will never participate in church again due in large part to the heavy-handed approach used by this group, and while we may have friends who belong to this church, we’re not likely to support its ministry in any meaningful way. Eventually, my wife asked her about it directly, but it became obvious that during their discussion her new friend was misrepresenting her church group in a way that we might think of as at least mildly deceptive.

These sort of encounters really reinforces the fact that our evangelism should have integrity.  In contrast, one our Mission Catalysts was making one of his routine visits to an ethnic restaurant in the Bronx. While meeting up with one of his Muslim friends, his friend declared that he knew why he (our missionary) came to their cafe on such a regular basis.  He said, “I know you come to talk to me about your beliefs, but that’s okay.  I like these conversations.”  Our missionary responded by affirming that yes indeed he hoped to share more about Jesus, but he also really enjoyed the friendship as well.  I appreciate how authentic and real his reply was.  While some might think it risky to openly agree with his friends’ assertion about the reason for his visits, it would risk far more to manipulate or deceive.  Honesty really is the best policy.

Our evangelism must have integrity.  While it’s not a good idea to walk into the room and out-rightly announce we are there to convert all non-believers, it is at least as destructive as witnesses of the Gospel to coerce or deceive.  I rather be bold, direct, and clear about the demand the Gospel makes on our lives than to manipulate or lie in order to get someone to my church — because then I have stopped representing the Gospel of Jesus Christ.  In evangelism, we are sent by Jesus, to mirror Jesus, and point others to Jesus.  In evangelism, the end doesn’t justify the means because the means must represent the end.

In a Part 2 to this article, we’ll later discuss ways to think about evangelism that is direct, bold, and honest.