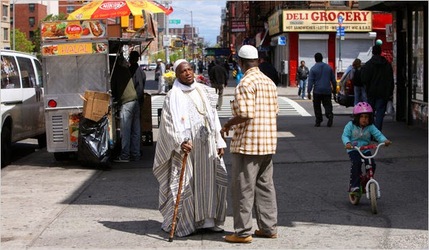 Walking down five flights of stairs and out the front door leads me to a new adventure. Just in that simple act I may cross paths with my Jamaican neighbor, my Puerto Rican neighbors, my Jewish neighbor or my Bangladesh Muslim neighbors.  Today the stairwell is empty.  I trot down the last 3 steps and my shoes meet the sidewalk.

Today’s path leads me past the train stop and to South Bronx. The goal is to find more Bangladesh stores or mosques and maybe a friendly conversation which can become a spiritual discussion perhaps someday leading to discipleship.

As I pass the train stop and head east my eyes scan over the title Al—- Masjid, a mosque. It is one of many establishments sharing a long structure and city block. Could this be a Bangladesh frequented Mosque? Next door is a store called Tea Time. I walk up to the corner store. At this point a young man, about my age, with a caramel brown complexion and jet black hair approaches me.

“Do you need something?”

“Hi. Does this store serve tea?” I ask, pointing to Tea Time.

“They’re closed right now but Imam [a Muslim religious leader] is making tea. You are welcome to share with us.”

I learn the young man’s name is R. He is a devout Bangladeshi Muslim and teacher who puts in extra hours tutoring at this Mosque.  The Imam walks in, dressed in white religious clothing, he greets me with a warm smile and a gesture to sit. He pours me a cup of tea served West African style. Imam H is his name. I learn he is from Mali, Africa.  His family—wife and children—are in an Ebola stricken country, Guinea.

After saying I teach English and teach the Ingil—the Gospel—R asks if I am here to “propagate Christianity?”

“I am a follower of Isa–Jesus and hope to share my faith with those who would listen.”

“Imam! This is important; get the Qu’ran.” R declares.

The Imam hands me an English Qu’ran.

“This is for you. You may keep it.” He says with an accent and a gentle tone.

“Let’s turn to the story of Maryam [Mary] and Isa to see what the Qur’an teaches about Jesus.” R says politely but with a great deal of seriousness.

The Qur’an study lasted an hour. R read the verses and commented occasionally.  The Qur’an mentioned that Jesus would die, be buried, and rise again. Interestingly at this point R paused and moved on without comment. [Qur’an reference: Surah Maryam 19:33]

Suddenly R received a phone call and had to leave. Now Imam H and I were left with just a few drops of tea left.

“You should come again for tea and we can talk more.”

Our conversation ended but many cups of tea were on the horizon.

What did I learn?

Understand the Person(s): Imam H and R understood my claim to be a follower of Jesus. However, our conversation was primarily geared toward hearing their heart and passion. Hearing, first hand, they’re own respect for Christians and how they teach true Islam is about peace not extreme militancy. While they know I am a follower of Jesus the time we spent was a time of strangers warming up to friendship and barriers becoming bridges; bridges from Maryam the Mother of the prophet Jesus,  to Mary and Jesus the  Savior.

Evangelism take away: First, establish early who you are and who you stand for—Jesus. In this way your actions and speech can be connected with you being a Jesus follower. Second, early disclosure gives people a clear understanding of your intentions. In other words, they  won’t be surprised by you sharing your faith. Nor will they feel manipulated. It’s evangelism ethics. Third, be confident in your faith and know it is okay to listen and learn. Listening and learning  helps you develop love for others.

Opening Doors:Through having tea with Imam H several  times God has allowed me to begin networking and meet people from all over the world. Imam H introduces me as a “good man”.  This introduction gives me instant credibility. I have now been introduced to a prominent Muslim community leader from Gambia. In the short time I have been engaging this Mosque I have met Muslims from Hungary, Mali, Gambia and Bangladesh.

Did you catch that?! This one Muslim community has people from West Africa, Europe, and South Asia! All people who, if reached for the gospel, could share the good news in their home countries. Three of which have UNREACHED* people groups. It is amazing the opportunities God has given us to make disciples at the world’s Crossroads.

Prayer for Imam H: Please pray for him and his family in an ebola-stricken country; he knows I am praying for him in Jesus’ name.