Have a heart for South Asians?  Check out The Bronx. 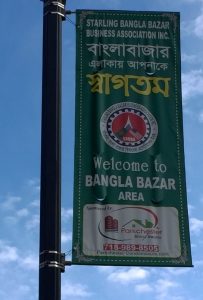 Soon after moving to New York City, I began to frequent a Pakistani restaurant that had opened in my Bronx neighborhood, where they displayed a sign for the house majid meeting just a few buildings down from our new church plant.  It was the one place in my crowded urban neighborhood that had large round tables if I was hosting a group from out of town.  Often I would sit with visitors to the city sharing naan, biryani, samosas, & curry chicken.

When I moved to The Bronx in 2001, I didn’t know much about Bangladesh, but twelve years later I found myself standing on Starling Avenue, the heart of the Bronx Bangladeshi community, at a street fair in the midst of hundreds of Bangladeshis. I learned how to say “thank you” in Bengali, so I would often catch workers by surprise when I shared my Bengali “thank you” at a Popeye’s chicken in Harlem or Dunkin Donuts in The Bronx.

In 1991, there were 10 families from Bangladesh living in The Bronx.  By 2009, that number was around 8000…. and growing.  At least half of the Bronx Bengali community lives in the Parkchester area as well as newer but growing community in Norwood.  The Bronx has become a dynamic mission field for connecting with South Asians, especially Bangladeshis.  If you are returning from serving in Bangladesh or among the Bangladeshi diaspora throughout Asia or in London and if you hope to continue to make disciples among South Asians, pray about whether The Bronx might be your next mission field.

When you think of The Bronx, Italian or Irish, Puerto Rican or Dominican neighborhoods might come to mind. However Parkchester, Van Nest, Pelham Parkway, and Norwood all represent significant Muslim communities that have grown & expanded over the last twenty years.  If you have a heart for South Asians, you might want to check out The Bronx.  And when you’re on your way to share a cup of tea & practice your Bengali with your friend at Castle Hill Avenue, you might run into a neighbor from The Gambia, Yemen, or Kosova as well.