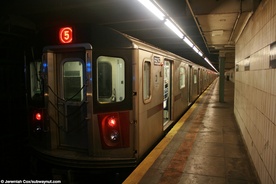 We were sitting there quietly enjoying our peaceful ride to Manhattan when he walked onto the 5 train.  He didn’t say a word, yet his presence was known by a smell that followed him; not a strong scent, yet certainly not pleasant.  He walked from one side of the south bound car to the other.  He bent over and began eating some food from the floor.

He bent over and began eating some food from the floor.

This wasn’t food he had dropped.  This was food someone hours before had dropped; food that had presumably been walked on by several dozen people this particular Friday afternoon.

We were on our way to celebrate the Chinese New Year with friends.  We would be drinking, eating dumplings and laughing as we reflected upon our past year.  He was eating off the floor of a train, and seeming content with this opportunity before him.

Jesus once said, “A man was going down from Jerusalem to Jericho, when he was attacked by robbers. They stripped him of his clothes, beat him and went away, leaving him half dead.   A priest happened to be going down the same road, and when he saw the man, he passed by on the other side.  So too, a Levite, when he came to the place and saw him, passed by on the other side. But a Samaritan, as he traveled, came where the man was; and when he saw him, he took pity on him. He went to him and bandaged his wounds, pouring on oil and wine. Then he put the man on his own donkey, brought him to an inn and took care of him. The next day he took out two denarii and gave them to the innkeeper. ‘Look after him,’ he said, ‘and when I return, I will reimburse you for any extra expense you may have.’

Jesus often proclaimed that we are to love our neighbor… but a question was posed to him by another religious teacher, “Who is our neighbor?”  This story above is how Jesus replied.

Back to 5 train…
He was eating off the floor and we were in shock.  The train was full, not crowded (as in standing room only) but I believe there were only 3 seats left open on our car.  Some people dressed like lawyers looked away from the man and one covered his nose.  Some parents distracted their children to avoid the awkward questions that were sure to follow.  One woman exclaimed “My god!” while another picked up her phone and focused intently on the screen.

I am friends with plenty of people who lack money and with several people who lack housing.  I’ve known people before who could use a sandwich; however, I’ve never seen someone eat food from the floor of a busy train car that someone else dropped.

I don’t have a lot of money and I didn’t want to share; but I said a quick prayer and the conviction I felt was heavy.

I offered him the seat next to me much to the dismay of the woman 2 seats over, however my new friend saw a wider berth across from my family and sat there instead.  He smiled and thanked me for my generosity, I replied saying, “I’d hope you’d do the same for me.”  After learning his name I introduced him to my family and upon arriving at our stop we began to get off the train.  As I was a passing a nicely dressed woman sitting six seats down from us she reached into her purse and then up to me, handing me a $5 bill she that she wanted to help us buy this man some food.  “Is that enough?” she asked.  I nodded.  “God bless you!” she stated, “ I’m so thankful someone is helping.”

I asked my new friend what he had in mind to eat, seeing that it was a frightfully cold night I assumed something warm.  However, in response he somewhat humbly requested a cold cut from any local bodega (corner deli).  We were in a ritzier neighborhood though than we are accustomed and there was no bodega in sight.  There was though a Pizza and sandwich shop which looked just right.  We went in and ordered a hot meatball hero to go, and then walked across the street to a Starbucks and picked up a coffee.

We all walked back together to the subway station, we prayed together… We asked that Jesus be with us as we went on our separate ways; we asked that we would serve others like He has served us, and I prayed that our new friend would find better luck in this New Year than he had in the past one.  Like the Samaritan in the story I realized that “temporary help” is only temporary, so I gave my new friend my phone number and told him the neighborhood I lived in.  I said, “I can’t afford to provide for another person all the time, but if you are nearby and need some help or want to talk, I’d be honored.”  My new friend thanked us several times and then went on his way.

Now, I don’t write about this encounter to boost my esteem or to cause you, the reader to think that my family is soooo generous.  In fact, we really did not do that much for this man.  Someone had been generous to us and given us a gift card to Starbucks previously, so between the gift card and the money that the woman on the train had given me, we spent all of 5 dollars.

Also, I don’t write about this encounter to shame you, the reader if you don’t often give to the American poor.  In Manhattan alone there are over 150 places that individuals can on “some days” get a free meal.  We have homeless shelters (one which houses the man from this story), and programs to assist people when they are going through hard times.  In fact, I often don’t give because I seldom think it be of any lasting assistance; sometimes giving can even be harmful as it feeds unneeded addictions.   However, we must realize that not all people are out to get ahead! Some just aren’t aware or educated about the programs in place and many just get lost in the shuffle.

The reason I am writing this in my blog because I believe it was God’s moment, and I believe it was beautiful.  This was an opportunity for my family to take a leap of faith and to love our neighbor.  In the story Jesus told he was explaining to the man who asked the question (a Jew), that even your enemies are your neighbors.  This homeless man on the 5 train was no enemy of mine, but like every other human… he’s my neighbor too.

After telling the story about the man who was mugged and the man who had mercy, Jesus said: “Go and do likewise.”

And if you also are a Christian, you need to do as Jesus said… “Go and do likewise.”