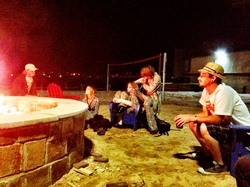 Most of you all know that we just moved to Austin a little over a week ago.  I thought I’d take a bit of time to recap what the first week has been like here in the capital city.

After moving into our apartment we began to meet some of our neighbors.  I’ve been spending most of the mornings out on our front porch, drinking coffee, praying, journaling, and letting our new puppy Jack explore a bit.  These morning have been the best way by far to meet my neighbors.  To our left is two young college girls who are rarely home and just moved in a few weeks before us.  Another door down from them is a young latino family.  They have two little girls.  Their dad lives in Houston where he works as a tattoo artist.  He comes to visit them on the weekends.  To our right is a gay couple and a female friend.  All also college students.  They have a little pug named Penelope that likes to play with Jack.

One of our other neighbors is Kirk.  He’s in his mid to late 50s and works as a high-end residential carpenter.  He’s a happy-go-lucky hippy with great taste in music, an affinity for the arts, community, cigarettes, alcohol and bonfires with a dark past that we’ve only scratched the surface of so far.

He invited us out to his weekly bonfire at the apartment community’s fire pit, so we joined him on Saturday night.

He had a huge bonfire going by the time we got there at 7:45.  We were met there by Kirk, Joey (a 20 something who works as a supervisor at Home Depot) and 6 other teens-early 20s.  At least three of them where high (on something other than Jesus).  One of them was wearing a 3 piece cotton zebra suit.  The third piece of course being a tank top, not a vest.  Obviously…

He brought 2 large rats with him who he let crawl around under his tank top.  He didn’t seem to mind when they peed on him, though he liked to comment on it.

Welcome to Austin.  Keeping it weird.  One zebra suit at a time.